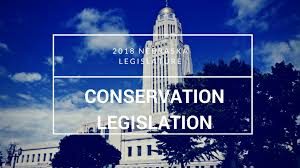 The Nebraska Sportsmen’s Foundation is in full swing of legislative battles as you read this. It is important to lay some ground work on how the legislative session works. Not to mention how the NSF plans our work load for each session. I only do this as it has been pointed out to me that sometimes we speak in Greek when it comes to what it is going on. This is not intentional but is simply what we do every day. We are 100% immersed in the fight! Sometimes we forget that you have other things to do and do not follow the daily grind of the legislative battles.

The NSF spends every summer working with our members, partners, state agencies and of course our state senators and their legal staffs. This work is on issues brought to us as concerns or ideas. These may be how to improve protection or request to defeat harmful legislation.  Each year we work to have at least 2-3 priority bills. Priority bills are ones we helped design, write and research.

Over the last seven years, the NSF has won positive legislation on 102 out of 211 bills. An astounding 48% win percentage. This includes all bills. Whether it was a negative bill that we needed to defeat, bills we helped create or ones we simply worked with the bill sponsor as a partner.

This session the NSF brought only one new priority bill – LB 1008. However, we had three priority bills carry over from the first session; LB 902, LB 984 and LB 636. Overall, we are working on 13 bills this session.  Since we are not done with the session, the outcomes of our bills are yet to be decided. As of March 26, here is the statues of the key bills:

LB 1008 – Increases amounts of liquidated damages for certain violations of the Game Law. It passed first round on floor. Not to mention, it is also a Natural Resource Committee Priority Bill.

LB902 – Authorize the withholding from the public of information regarding firearm registration, possession, sale, or use. This is a carry over bill and is on General File. Scheduled to be heard this week. Senator Bostelman has this as his Priority Bill.

LB730 – Adopt the Ammunition Excise Tax Act. This bill was defeated in committee.

LB780 – Prohibit the manufacture, import, transfer, and possession of multiburst trigger activators and firearm silencers.  This bill was defeated in committee.

We are hopeful to end the session with wins on 9 of the 13 bills. There are 11 working days of the session left and still a lot of work to be done. In the meantime, we want to hear form you. What are key issues for you? Let the NSF know and we can start to have discussions on the how, what and when.

On average it takes between two and three years to get a bill passed. So understand the NSF is in the fight for the long haul and we will run the race on your behalf. We hope to hear from you,

Don’t forget to take someone NEW afield, fishing or to the shooting range. Above all, ENJOY our wonderful resources we have to offer.