Encroachment of Eastern Red Cedar Trees is a Major Challenge

600% Increase in Nebraska Cedar Forest Over the Last 30 Years 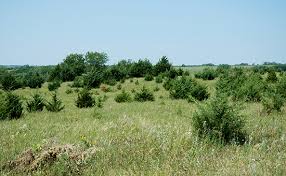 Last January, the Conservation Roundtable took their concerns about cedar tree encroachment to the Nebraska capital. In conjunction with the Cedar Task Force and Prescribed Fire Council, we hosted a breakfast for Nebraska Senators. This gave us the opportunity to share our united concern. Cedar spread happens slowly and often goes without notice. But over the last 30 years, cedar forest has increased 600% in Nebraska.  When scattered cedar trees transition to a forest, they reduce grassland dependent wildlife, reduce forage production, reduce stream flow and increase wildfire risk.  It is estimated that given the current rate of spread, it will cost Nebraskans 15 million annually just to prevent more grasslands from becoming a cedar forest. Many senators heard our message, and there is hope for continued dialogue among policy makers.

Engaged in National Issues Too

The Conservation Roundtable also engages on national issues. Last December, Nebraska’s Congressman Jeff Fortenberry introduced Recovering America’s Wildlife Act with Congresswoman Dingell from Michigan. Many members of the Conservation Roundtable, including the Big Game Conservation Association, have signed on their support. If passed, the bill will redirect $1.3 billion in existing royalties annually from the development of energy and mineral resources on federal lands and waters to conserve the full array of fish and wildlife.  In Nebraska, funding will improve and create habitat for wildlife on both public lands and private lands through voluntary incentives.  It will support research to inform species’ management decisions, it will support conservation education and will also fund wildlife related recreation in local communities, cities and State Parks.